(Asked by Paul from Dublin, Ireland)

Y’know, I visited your fine city of Dublin many years ago and had a wonderful time. It is a truly magical place.

Anyway, on to your question…. 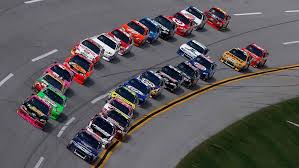 NASCAR drivers use a unique radio system that is built in to their crash helmets. These are occasionally customized to suit the individual wearer. In addition to this, there is a push-to-talk button (exactly like the one found on a walkie-talkie), which is situated in the steering wheel. A wiring harness connects the various components together and a separate battery operates the whole thing. The signal is broadcast via a whip antenna that is attached to the roof of the car. In this fashion, NASCAR drivers are able to communicate with pit crews.

In addition to this, most cars are outfitted with a spare Motorola two-way radio that is within easy reach of the driver.

A firm out of Atlanta, Georgia named ‘Racing Radios’ provides the vast majority of the radios used in NASCAR races. Racing Radios have provided equipment to NASCAR races for 30 years or so; they are a trusted firm, creating all the standard NASCAR radio technology and also providing custom radios/peripherals for individual drivers.

According to Racing Radios spokesperson Tony Cornacchia, the majority of NASCAR drivers prefer to buy their own specialized equipment from the firm.

Because so many teams are racing and so many people are working on the race overall, it is not uncommon for NASCAR events to feature 100 FCC licensed radio broadcasts at any given time.Racing Radios is the company that programs the individual frequencies, not only for drivers and pit crews, but also for staff, officials and security personnel. RR do such a good job, that neither drivers nor pit crews suffer regularly from interference or dead spots. Now that’s something.

According to Terry Boyce of ‘HowStuffWorks’, “Many teams outfit their entire pit and support crews with custom-engineered, hand-built headphones and two-way radios ordered through Racing Radios. Multi-car teams may choose to connect even more people through their radio communications network. Active Noise Reduction (ANR) technology helps to cancel out distracting background noise. Exceptional communication is one of the reasons a 21st century NASCAR pit crew can change four tires and refuel a race car in around 13 seconds — and do it 10 or more times in a single race”.

I hope that answers your question, Paul. Have fun!